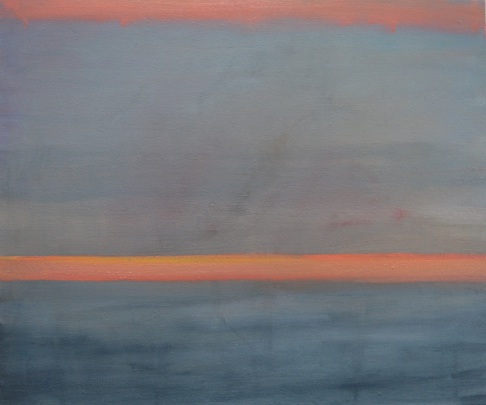 Following the postponement of his solo exhibition Y BAE, Pete Jones reflects on the fluid nature of creating art during a pandemic and how his collection draws personal and cultural inspiration from his childhood in Hirael, Bangor.

My next solo exhibition of paintings was set to take place in the Storiel Gallery, Bangor during early 2020. Like so many events, the world-wide pandemic has made it necessary to re-schedule and the show is now due to begin during September 2021. Similar to my previous solo show at Oriel Ynys Mon during 2019, there is a large autobiographical element to the paintings. The show is entitled “Y BAE” (The Bay) and is an exploration of the area in which I grew up, the Hirael area of Bangor.

I wanted to explore the context in which this new collection of work is being prepared. As an artist I begin with feelings about a theme, person or place. The process of painting can be all consuming and sometimes takes some work in directions that I had not planned, “accidents” and “chance” are important.  I think that I generally try to create a “visual ambience”, a feeling for a place rather than a photographic reproduction of what is before me. This has led to some of my recent work becoming more abstract in form. I have also started to experiment with sound and film.

Hirael Bay was made from sea and slate. The maritime and slate industries were the foundations for its development during the 19th and early twentieth centuries. Penrhyn dock was once the biggest slate port in the world. The community of Hirael was a proud one, all the world was there…. Sailors, Pious chapel goers, Drinkers, Composers, ship builders, poets, slate splitters, fighters, foundry workers, saints and sinners. I grew up in Hirael during the 1970s, a time by which much of the industry had gone. Looking back there was quite a bit of what could be described as dereliction. Our playgrounds included empty houses and half-demolished streets, disused military huts “on Beach” and the old foundry. Music was important to us, the dominant beats in Foundry Street, were Northern Soul and Motown.

The smell of the sea (and mud during hot summers) was strong and a reminder of our proximity to the deep. Hirael has always been prone to flooding from the sea. Large parts of Hirael are below sea level and its people have lived through many a deluge over the years. The council used to issue sandbags for us to place in doorways. I remember the feeling of dread whilst watching levels rise outside our backdoor – these feelings inspired the painting “Breuddwyd am storm yn Bae Hirael” (Dream about a storm in Hirael Bay).

The bay is tidal, when the sea is out a large expanse of mud is laid bare, brown and smooth apart from the area that is the site of the skeletal wreck of a boat. When I was a child, the “ribs” of the boat stood proud, and I often fantasised that it was the remains of an old Viking ship (it wasn’t). Little remains of the vessel these days, perhaps a metaphor for the area itself.

Football was a major activity during my childhood. The main street game was “10 lives“ which was played against any wall. There was a team of older lads, including my brother, called Bangor Dynamo, my first football heroes. There was a pecking order with local football – the younger lads always wanted to play with the older ones, but it was a “closed -shop”. When they actually allowed you to join in with them, due to lack of players (or willing goalkeepers) or some other reason, you felt ten feet tall. Most games took place “on beach”, a football field directly overlooking the sea, a sea into which many balls were lost. During hot summer evenings curlews would call from the mud and large groups of boys would play football on the edge of the sea. It was here that I would often gaze out at the horizon and wonder what was beyond it. Whilst at school I recall reading about an artist who stated that the sea was a “symbol of the infinite” (Monet, I think, but my memory fails). Whoever that was, that assertion was something that resonated greatly with me and has stuck with me throughout my life. Horizons play a prominent role in the show for example “Y Gorwel bell” (The far horizon) and “Gorwel ” (Horizon), the latter image being almost reduced to abstraction.

At the Northerly point of Hirael Bay lies the Garth area and its Victorian pier. The Pier was an important feature in my childhood. I remember walking on the pier as a small boy and seeing the green sea fall and rise between the cracks of the boards. I remember squeezing mam’s hand as tightly as I could, afraid that I would fall through those cracks. I would later spend many summer evenings trying to catch mackerel or “flatties” with the other lads, it was a fun place to be.

As I get older, the pier, now with its memorial benches, nameplates and bouquets feels more like a place of remembrance. My painting “Hiraeth” has attempted to capture the essence of that feeling, featuring a roughly painted bouquet of dying roses blowing away in the wind. Whilst undertaking the work for this exhibition a gamut of feelings have driven the work (hopefully without being overly sentimental). Cezanne, I think, once suggested that a work of art that did not begin in emotion is not art and I take comfort from that.

Whilst the process of painting has continued, I have also ventured into film making, creating a short piece which reflects this context in which the work has been created. Two cultural reference points have been important to me in this process, the poems of local man T. Llewelyn Williams who wrote about his own life in Hirael, and a series of photographic portraits of the people of Hirael taken by photographer Garry Stuart during the mid-70s. Garry took these images whilst a contemporary of the film director Danny Boyle during his time at Bangor university. These bodies of work have impressed me over the years and have encapsulated much of what I feel for the area. Some of their work features in the short film that I have made to show at the exhibition. Also included within the film is my own “soundscape”. Whilst not a musician my adolescence during the punk era gave me the confidence to experiment with music, an approach which probably leads to my attitude towards painting in so far as I am not precious about my work.  I have been experimenting with ambient electronic sound and hope that the results compliment the imagery presented within the film.

The extended lead into the exhibition due to the pandemic has meant that much of the original work has been discarded and new work created. As I am not precious about my paintings I will often paint over “finished” works. With several months left before the exhibition it may be that the final work for it has not yet been created.