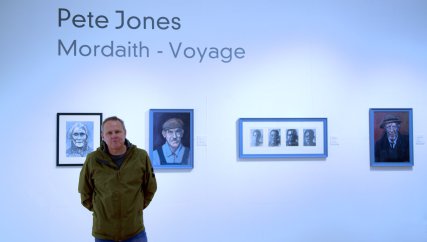 My first major solo exhibiton took place at Oriel Ynys Môn during 2019. This included over 70 pieces of work and was kindly supported by the Arts Council of Wales. Prior to the event, Wales Arts Review published my short essay on the background to the exhibition and the autobiographical nature of the show.

I am grateful to Wales Arts Review for considering  this show to be amongst the top 10 visual arts exhibitions in Wales for 2019.

For thirty five years, Pete Jones worked in the NHS as a learning disability nurse, unable to fulfil his ambition of becoming a full-time painter. Now, on the eve of his first ever solo exhibition, at Oriel Ynys Môn on Anglesey, Pete reflects on his journey, and his new artistic vision.

This June I will be holding my first major solo exhibition as a painter. Perhaps, oddly for a first show, it will be a retrospective in the sense that this is my first opportunity to reflect on my life and to explore the themes and imagery that have affected and influenced me over the past 58 years.

I spent my formative years in Hirael, a small, closely-knit area of Bangor with a rich maritime and industrial heritage linked to the Slate industry. Rows upon rows of council housing in a post-industrial community, typical of many other such areas around Wales. On leaving school I completed a degree in Fine Art at Loughborough College of Art & Design (Via Chester School of Art). On leaving Art College in 1983 I set about getting a life. Sadly for me “Life”, post-art college, consisted of rejected applications to undertake a Masters Degree from some of the finest institutions in the land and a twelve month stretch of unemployment in the East Midlands of England, a working-class “gap year” if you will.

During 1985 I returned home to Bangor, broke and looking for work. There followed some diverse, but short-term, employment as a Council labourer, Hospital Porter and Graphic Artist at the Welsh National Centre for Religious Education (the latter being quite a challenge for an atheist). During 1986 I enrolled to become a “Registered Nurse for the Mentally handicapped” as it was termed at the time. The training was based at Bryn-y-Neuadd Hospital at Llanfairfechan, just a few miles outside of Bangor. The reason for this swerve into the NHS still eludes me. I think I had a vague notion of wanting to become an Art Therapist and thought that this experience would help (It didn’t).

During the next few years I worked supporting adults labelled as having “learning disabilities and challenging behaviour”. Many individuals had mental health issues, sensory needs, physical-ill health and sometimes, profound physical impairments. Much of the challenges stemmed from a system and environment that wasn’t designed to respect the individual needs of human beings and were built around Victorian attitudes to power and control.

On becoming a nurse I remember thinking that I would have to forget any artistic ambitions that I previously had and focus completely on supporting the individuals I was working with. Having said that my interest in painting and painters had been a major theme in my life and was not something I could clear out of my memory bank easily.

An incident that was psychologically pivotal in terms of my future artwork, occurred whilst I was supporting a gentleman to have a bath in one of the cold, white-tiled, bathrooms at the hospital. Having just been washed, the usual routine was to lift him onto the adjacent medical examination couch so that he could be dried more effectively (his body was quite misshapen due to a serious physical condition). Having helped him on to the couch I went for some towels from a nearby cabinet and turned back towards him. It was at this point that the visual imagery of what was before me completely jarred my senses. It was as if I was standing in front of a painting by Francis Bacon. The isolated figure and warm flesh tones of a human being lying on a type of visual stage, with the cold structured surface of a large, tiled wall behind was the very format for one of Bacon’s works. This experience led me to start storing visual memories of the people I got to know and the situations I saw on a daily basis. I knew that I wanted to use this information to inform my future painting so these images went into my, now re-energised, memory bank.

Whilst I had undertaken sporadic painting commissions during my time as a nurse, these were limited due to working full-time and raising a family with my wife Anna (also a nurse).

Since my retirement from Nursing in 2016 I have returned to my primary ambition to become an accomplished painter. Much of my work in the past 3 years has reflected my experience of working in the Hospital, with individual portraits featuring heavily. Much of this work was based upon archive photographs and my own visual memory. I think it was Rembrandt who suggested that life etches itself onto faces showing our violence, excesses or kindnesses. Within such a context I have tried to capture the humanity and integrity of some of the people who lived (and died) in the hospital, many without families, and whose very existence would have been unknown to many. I was fortunate that one of my portraits “Joseph Roy Bevans” is now in the collection of the National Library of Wales and will be loaned for the exhibition. This painting also featured in a short film by Paul Hunt, “A Hidden Portrait” which was shown on BBC2 Wales last year.

This exhibition is an illustration of my own life through a range of themes including disability, mental health, identity, mortality, loss and yearning (“Hiraeth”). The backdrop for this work is the physical and cultural environment of Wales. Important reference points are people I have known whose lives took very different “voyages” to my own. The titles of some of the paintings, I hope, add an extra dimension to the imagery.“Satellite of love”, “Moonage Daydream” and “Love will tear us apart” reflect the importance of music in my life over the years. There are also pieces that explore notions of Welsh cultural identity e.g. “Capel Celyn” and “Cadair Longshanks”.

Painting can be a powerful vehicle for conveying ideas and feelings. I think that it is fundamentally important that painting either makes people think something or feel something and that exceptional painting can do both. This exhibition is very personal to me and I certainly feel, like many artists, that there will be an element of me bearing my soul to the public. I hope that the diversity of themes and imagery will resonate with people who come to the show. 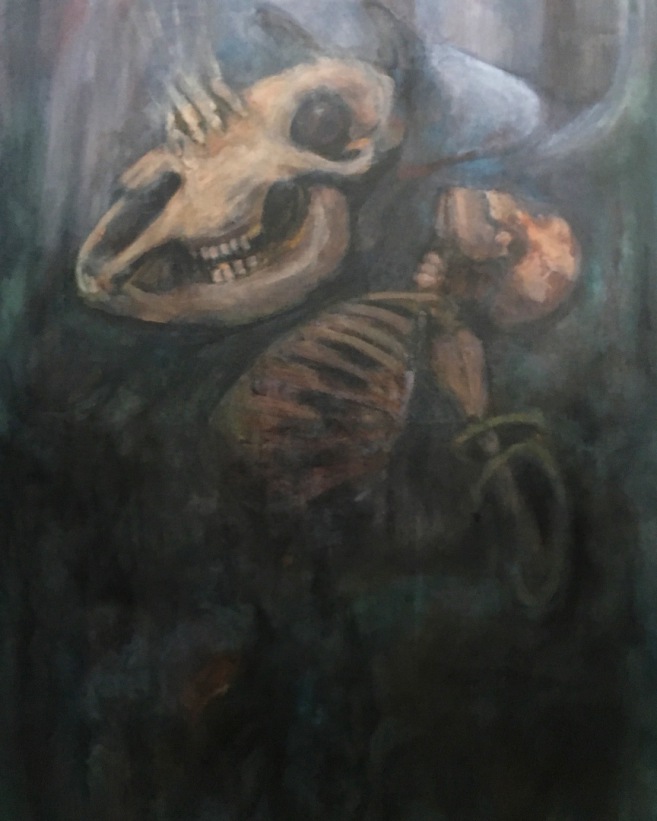 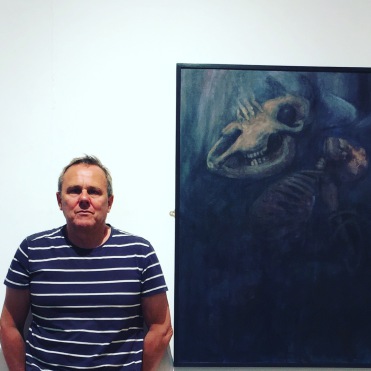 Some comments on the "Mordaith" exhibtion:

"Must see exhibition at Oriel Ynys Mon. Pete Jones, pluralist exhibition of the time, sings with several voices. We briefly had the pleasure of exhibiting some of Pete Jones portraits at Galeri 45. His latest exhibition embraces pluralism and rather singing off one voice sings off several. Congratulations Pete on a truly stunning exhibition".   (Louise Morgan RCA, Galeri 45, Bangor.)

"Llongyfarchiadau, Pete Jones. What a brilliant exhibition, so full of imagination and humanity. It's a body of work with real substance. It's an exhibition that creates a lasting impression".(Fiona Owen, musician and writer)

"Within five minutes we’ve already decided that before this show leaves town, we’ll return another day to contemplate every single piece in post-launch quiet. Together and apart, we explore the space in random fashion. At every turn there is the unmistakable power that derives from unswerving honesty and integrity. Even matters of taste could not deflect from the fact that these paintings might have needed extra fixings such is the weight of their impact. There are exhibitions that draw narrow-eyed consideration, ones that soothe and ones that hit or miss and there are ones like this - that stop you in your tracks. When you visit Oriel Môn, as surely as you must, to stand in contemplation of ‘Mordaith’ by Pete Jones, you will not so much witness what he has done but what he IS. I feel ill-equipped to describe the works, much less critique them, so go and see for yourself". (John Dexter-Jones, Musician & Writer)

"A great mix of a life's worth of influences from Welsh traditions, music, work and politics"  Chris Conway.

"A courageous depiction of how things are"  Jean Clarke.

"You have given a voice to those who have none"  Barry Lewis.

"A truly wonderful exhibition which bought tears to my eyes"  John Lunt.

"So impressed by the depth of human feeling in these paintings'  Carole Wilson. 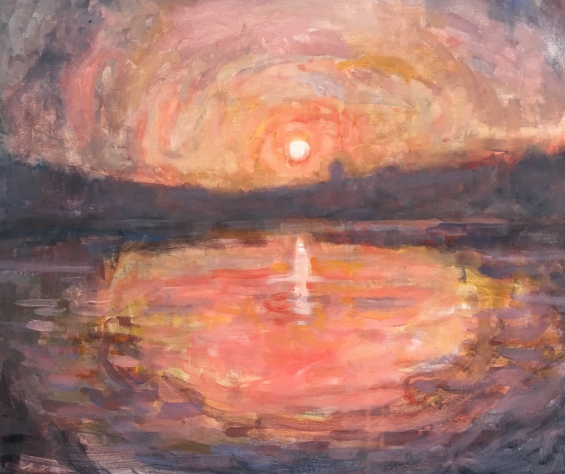 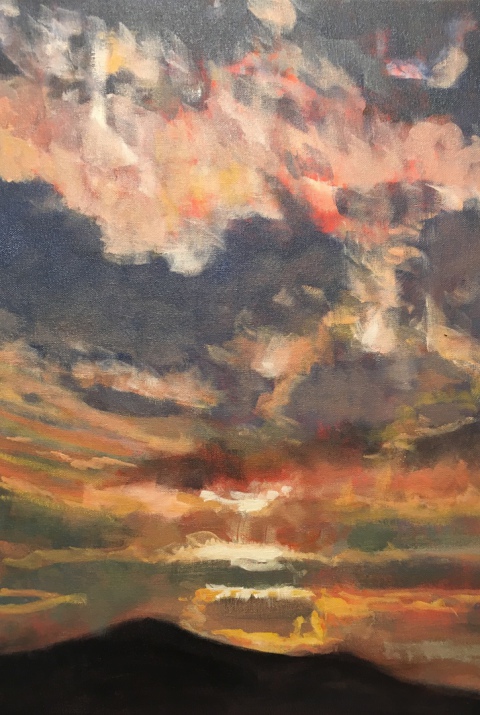