Some things that are unimportant to most people can have huge significance for others. 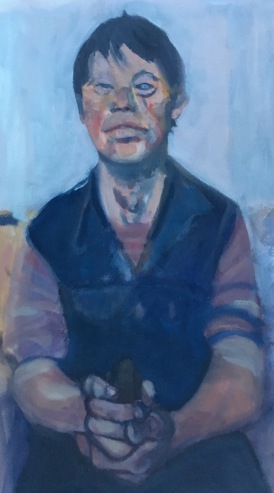 "Holding the Stone" - Collection of the National Museum of Wales.

I worked as a Learning Disability Nurse for 30 years. During this time I met many extraordinary people. My career began at Bryn y Neuadd Hospital in 1986.

Bryn y Neuadd was "purpose built' during1971, the year in which national policy declared that people then labelled as being "mentally handicapped" should no longer live in hospitals. Towards the end of my nursing career I began to paint some of the people that I had known, using old photographs and strong visual memories.

Bryn-y-Neuadd Hospital is situated in the village of Llanfairfechan on the Northern coast of Wales. This hospital was one of many across the country which was part of a historical system of institutional segregation. The many hundreds of people who lived (and died) through this system are largely forgotten.The system was dehumanising and individuality was discouraged, "Block treatment" was the order of the day.....personal identities were eroded and sometimes lost....

I met some incredible people throughout this period. I have tried and continue try to create a visual record of a lost population, a record of the character and humanity of people who's history will largely be forgotten.

One such person was Joseph Roy Bevans. Joe was a character. In a sea of chaos, Joe stood out. 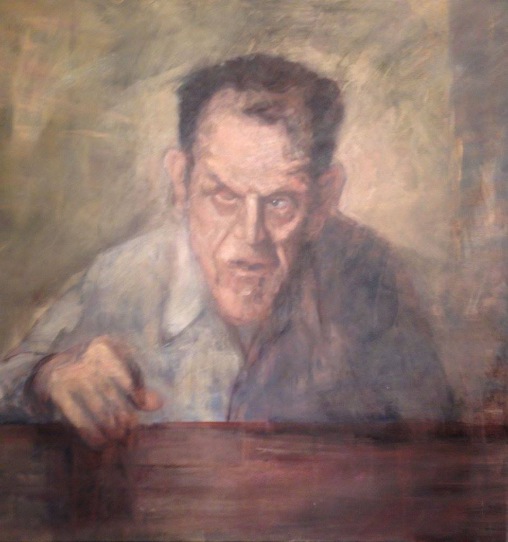 "Joseph Roy Bevans" Acrylic on canvas. Collection of the National Library of Wales.

(It's My Shout productions)

Link to a short film by Paul Hunt about the background to the 2016 portrait of Joe Bevans first shown on BBC2 Wales.

David was a lovely character who wore is hat and scarf all day, every day, whatever the weather (I think he might have worn his hat to bed at night also but my memory fails). His hat permanently covered his beautiful, piercing blue eyes, eyes that very few people got to see. For the painting itself I used oil paint, which at the time, I found difficult to use, preferring the immediacy and drying qualities of acrylic. The wooden frame of the painting has it's own story as I found it, old and weather beaten, in a hedgerow at the very edge of Pen Llyn. On completion of the painting I noticed the frame in the studio and inserted the painting which, to my surprise, fitted not only physically but enhanced (I think) the image of a man who himself had been "weathered" by fate and time. RIP David. 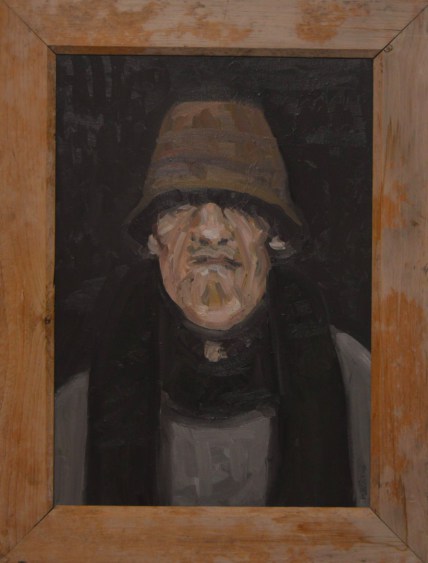 I was working to paint a portrait of a former "resident" at Bryn y Neuadd hospital. I was working from a series of photographs and my own visual memory of the person. I had been trying to work on the face and features for some time, laying on layers of paint and rubbing it away. Quite often I struggle to know when to stop on a painting but there came a point that I realised that the unresolved face of this person perhaps made a more profound visual statement regarding the erosion and loss of personal identity that befell so many thousands of people who had been labelled as having a "learning disability" and who lived (and died) in the hospital system. 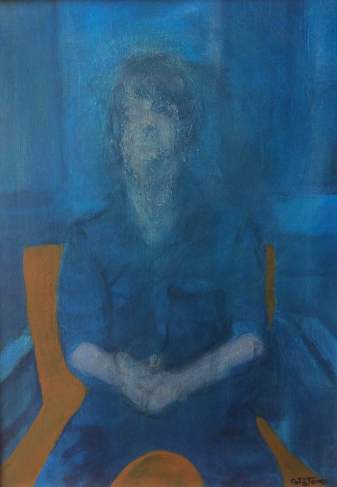